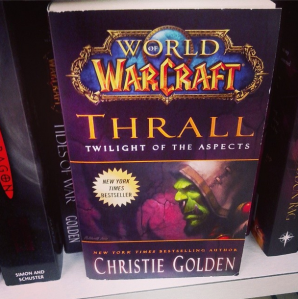 (Found this world of warcraft novel inside a bookstore. 😀 sadly I was broke, I ended up just taking a picture of it)

I’m not a big fan of reading but once I start, I never stop. Just now, I went to a bookstore for some window-shopping. Instead of just standing near the window, I actually did get into the store.

I ended up reading a few books for hours. One of them is the book shown above. ↑ (Thrall~~) There’s a lot of good books like World War Z, World of Warcraft, The Alchemist, and few others. It’s like all the books I wanted to buy are only available when I’m broke.

You know what I hate most about buying books? Series.

Books like World of Warcraft, Light novels, J.R.R Tolkien work on the Hobbit and Lord of Rings, Diary of A Wimpy Kid, etc. If you bought one of them, you must buy the others. To make matter worse, not all of them are available on the same place. One you have to buy here, and the other are waaaaay over there and sometimes it’s not even there.

I guess I have to search again.

Have you ever sit in your classroom and just think?

Even though class is over, and there’s nothing more to do but you still found yourself sitting, thinking, and doing nothing.

I don’t know about you, but I kind of like it. There’s peace, even though the things before it (such as classes or teachers) are not peaceful at all.

But not everyone like it. Few of my friends choose other places to cool off. I guess each person has their own place to achieve peace of mind, even just for a second.

I’m out of ideas. Goodnight~
Have a nice weekend.

I live in a sea of lies, mountains of misery, under the darkness of the night with nothing to cover my fate as I wander on this wretched place.

I was alone. My only companion was the sound of my footsteps that echoed through the street. I found myself lost, without any sense of direction. As if I’m in another dimension, walking around, waiting for my decimation.

There’s no light, but the moon that shines atop. Someone, please don’t let my body drop, even though I’m losing the fight. So please, don’t let me die tonight.

Somehow I found myself writing this in the toilet. (damn bananas)

Anyway, I’m 20 hours away from my exam and I’m still waiting for my bowels to move.

It was not easy answering nature’s call. Specially when you’re in a line waiting to pay your groceries and the cashier is like “are you sure this is yours?”

To make matters worse, nature doesn’t call or knock. It just came around your doorstep and bam! You better find a toilet quick or suffer the consequences.

Luckily, I manage to ran all the way home, with more than 5 kilos of groceries. 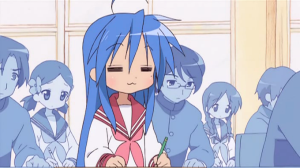 Last week we had an end of the year exam. I should have post this sooner but I was too lazy back then. (Sorry :3) But the exam is not over, the thing will be continued tomorrow and probably will end by next week.

I wasn’t really working hard on this one. My main aim or purpose was just to pass it. I don’t need flying colours, black and white will do for me.

Although I have no chance of getting a higher position than I already am. (which is last) I don’t really care.

Anyway, tomorrow the exam will continue and it will last for a week before another month of torture comes. I just hope I will be able to endure it until the end year vacation.

What is scarier? Movies or books.

The other day I watched a horror movie.

Eventhough my eyes were shut almost the whole film, I’m pretty sure that the only scary part was the foreplay. (except the background music and excessive jump scare)

After the ‘thing’ showed up, like zombies, ghost, vampire, or anything that fits inside that category. I’m already bored.

For example, if you bring a lot people and watch a ghost movie. Everytime you bring that movie up in a conversation, they’ll think about the ‘thing’ and its just the same. Because all of you have seen it.

Now for the books. I’m not a big fan of reading. But once I start, I just can’t stop.

This morning, I read a horror story, it was just a short one. But it was pretty good. The details, the mystery, the atmosphere.

The thing about book is that they let our imagination do the work. For example, bring a lot of people, and let them read a scary story. There’s a chance that none of them imagine the same creature.

The thing is, we are most likely scared of our own imagination.

The gap between knowing the creature (in this case, creatures from stories) and seeing it is very small. In the movies, you can see the creature or monster but you can’t do that in a book (unless there’s illustration)

The gap is filled with our imagination. It is filed with what scared us most.

But book can’t do jump scare or any creepy background music can’t they?

If I have to choose between movies or books . I would choose none. Because I’m not a fan of scary stories.

Have a nice day.

My escape from reality